I’ve sat in front the TV many evenings. The cleaver comes flying down in the midst of the letters C-H-O-P-P-E-D to the suspenseful, gameshow-like music. The competitors are introduced and welcomed, and the somewhere-between-cavalier-and-prestigious voice of Ted Allen makes clear the rules:

He goes on to list the four incompatible ingredients that the contestants must combine in harmony.

“Chefs, there are 20 minutes on the clock. Time starts- now.”

Commander Fleet Activities Yokosuka was hosting they’re very own Chopped competition. I’d made it to the galley to watch the opening days of the competition. I’d watched, listening for the voice and mannerisms of Ted Allen and the intrigue of the show’s judges. The most I could find was the familiar shock, cluelessness and occasional crafty smiles, revealed by a  glance down the row of military chefs. I observed, examining the caliber of chef, imagining what I would do with such ingredients, noting common mistakes, listening to judges’ critiques and making my own. 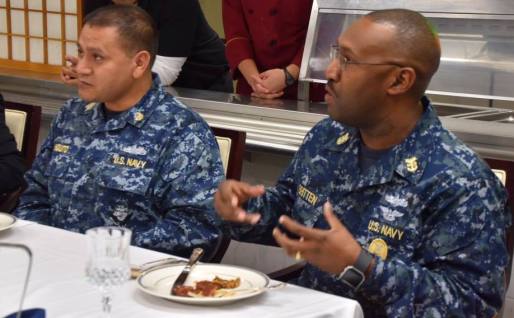 I had very little trouble conceptualizing dishes. It would be executing the concept that stood in the way. I grew pretty comfortable and confident, nonetheless, believing that anymore effort at this point wouldn’t accomplish too much. I did, however, look up some basic baking ratios, as I’m not yet the strongest baker.

Our cook from Com7thFleet, Juan Castilloadame won; on to the championship round! 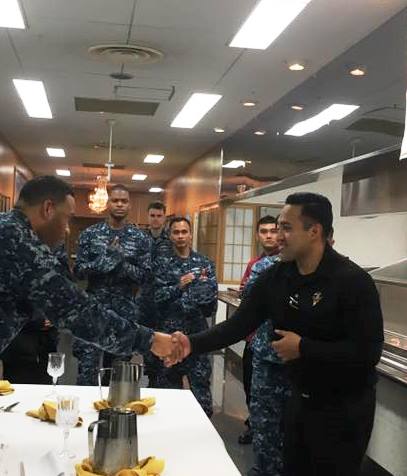 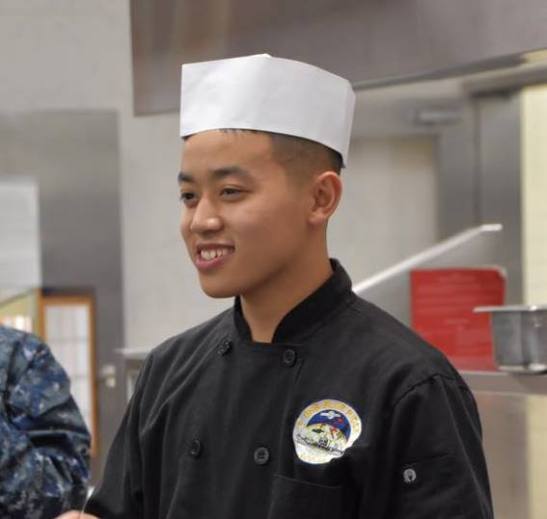 After the next day’s winner was selected, my turn had come. I had reason to expect plenty of friendly faces in the audience and with all the hype, they were expecting the win. As confident as I was, I was a little less comfy now that it was time to perform. I’d never actually done this before. And I was well aware of how much easier it was to criticize from the other side of the prep table compared to being the criticized. 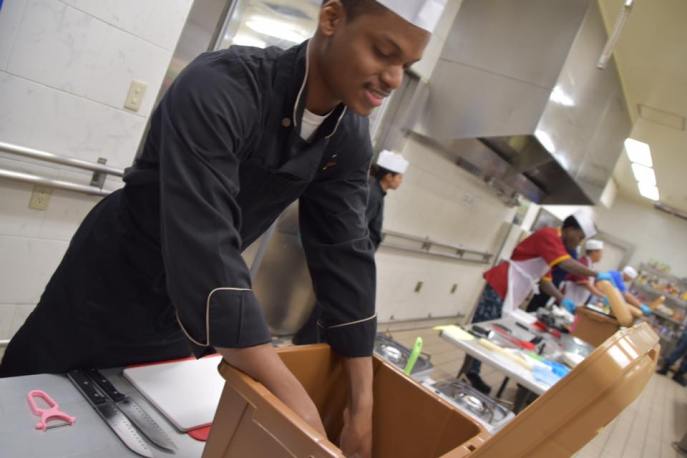 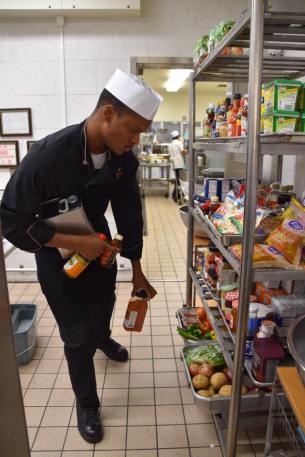 Grabbing ingredients for my mango vinaigrette.

“You may open your baskets,” the words had finally come. “Your mystery ingredients are: mango, asparagus, green plantain, and octopus.” Octopus?! Really?

I take off to the sink to wash my hands as I planned my dish: a mango salad, dressed in a vinaigrette based from the mango’s juice, with sliced octopus, blanched asparagus and tostones (twice fried green plantain, pressed after the first fry for a crispy, yet fluffy…chip). If you’ve ever seen the show, plans are almost taboo! Things rarely, if ever go as planned. I found myself in the final seconds snatching imperfect rounds of plantain off the surface of the frying oil onto my scattered plate of marinated mango and octopus with spears of asparagus- not where I had seen myself twenty minutes ago, nor what I imagined my plate would look like. I heard excitement from the audience though, “Get it on the plate! Get it on the plate!”

My plates were colorful and demonstrated some effort. But the judges weren’t going to let me get away with chewy octopus and they demanded height, drawing their eyes and forcing them to eat the components together. I was especially embarrassed of my presentation of the green plantain, considering the Puerto Rican at the table She knew what she was looking for.  Regardless, she didn’t find it on the competition’s plate either. The domed lid was lifted to reveal an empty plate! It belonged to a competitor who merely chopped the mango and raw green plantain, earning himself the chopping block. 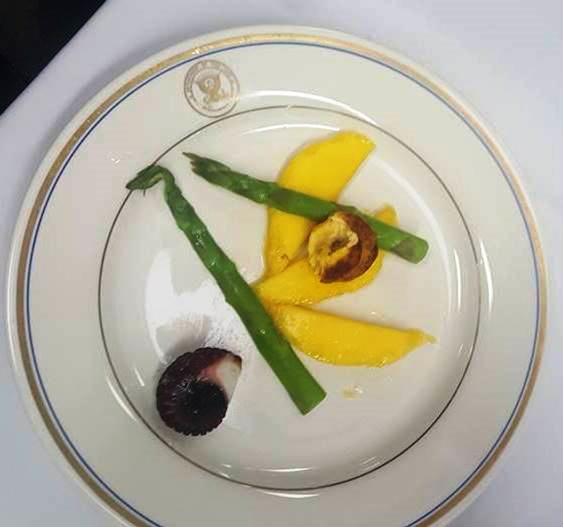 I think a more successful attempt would have been to fan out the mango in the same direction, shave the asparagus with a peeler pinched into a small mound on neatly arranged, thinly sliced rounds of octopus with bias cut plantain chips leaning against the salad.

Judge on the right was hungry for some ceviche!

Then there were three.

The next basket included duck, red chile pepper, coconut milk, and chocolate covered raisins. I thought the obvious was curry, but the curry powder had disappeared to the table of the competition. I threw some Jasmine rice on the burner anyway to cook in coconut milk. The duck breasts were scored and moved to the grill. Legs were reserved for stock. I could hear my coworkers trying to figure out my dish. I didn’t totally know though. I knew I was headed for Asia. The goal was to render the duck fat, sear the breast, and finish in the oven. Yeah right! Feeling the time crunch, I sliced the breast and seared the strips. I folded the raisins into the rice and called it pilaf, served with sautéed spinach in orange sauce. While making the sauce for the duck, I created a cornstarch slurry that turned into a gel. The clock ticking, I dumped the sauce from the spinach in what was now a coconut gel. It didn’t do enough though. The duck hit the plate and the clock hit zero. 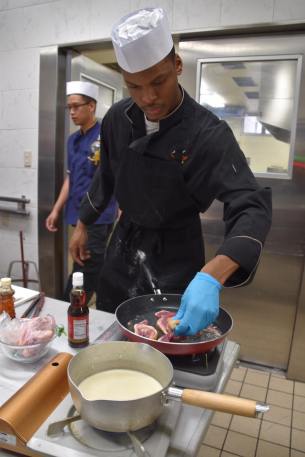 The judges were amazed with the flavors of the plate until they got to my unseasoned duck. But the small portion size and lack of creativity of the cook on my left spared me.

Welcome to the dessert round!

I knew I had this! During our preliminary walkthrough, the question was asked, “Any bakers?” No hands went up. I opened my basket to find pineapple, salted sunflower seeds, Oreo cookies, and Crisco. 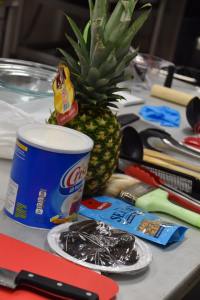 This couldn’t be too hard. The ratios that I reviewed were cycling through my mind. I thought perhaps the easiest would be the cookies. 3 flour- 2 fat- 1 sugar. During my time on board the Reagan, I made some Pineapple Upside Down Cookies. To dice the pineapple might take too much time though. I snatched the Oreos and ground them into some flour, and measured out the Crisco, and brown and white sugars and some rum flavoring. After mixing them into a dough, I buttered a muffin pan and covered the bottoms with brown sugar and the sunflower seeds. I wanted to make a sunflower seed brittle too but we’d have to wait and see. I threw the cookie dough into the prepared pans and headed for the oven to make sure they baked in time.

I sliced half the pineapple and pulped the rest to make my pineapple sauce. It actually started out as the glaze that goes on the cake, melting Crisco with butter flavor and sugar. I then added the pineapple but it was juicier than prepared for, transforming it from a sticky glaze to more of a puree. Throughout the competition, I wanted to ensure maximum utilization of the ingredients. I opened the Oreos and scraped the cream filling (which is probably made out of more Crisco) into the sauce along with some lime juice. With the pineapple slices, I coated them in a mixture of crushed sunflower seeds, brown sugar and graham cracker crumbs, frying them in butter. 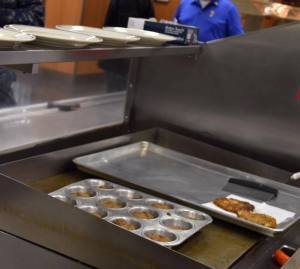 By this time, my…cookies, had come  out the oven and cooled into what looked like muffins. I spooned a circle of the sauce within the rim of the plate. At the center of the plate lay the sunflower seed crusted pineapple wedge. The muffin was poised on the wedge and draped with another helping of pineapple sauce. With seconds to spare, I exhaled, took a step bag and checked my work. Best looking plate of the day. On my way to and from the pantry, I noticed the Molina assembling a surprisingly composed plate. Took me by surprise but it wouldn’t change my plan. 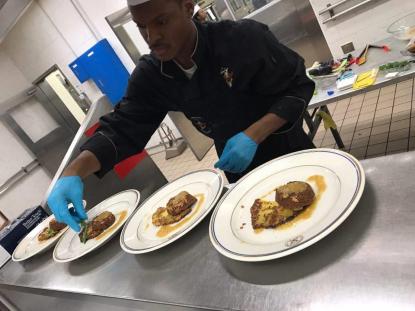 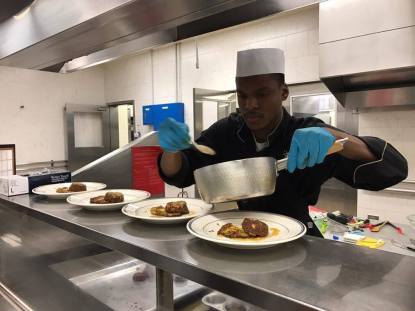 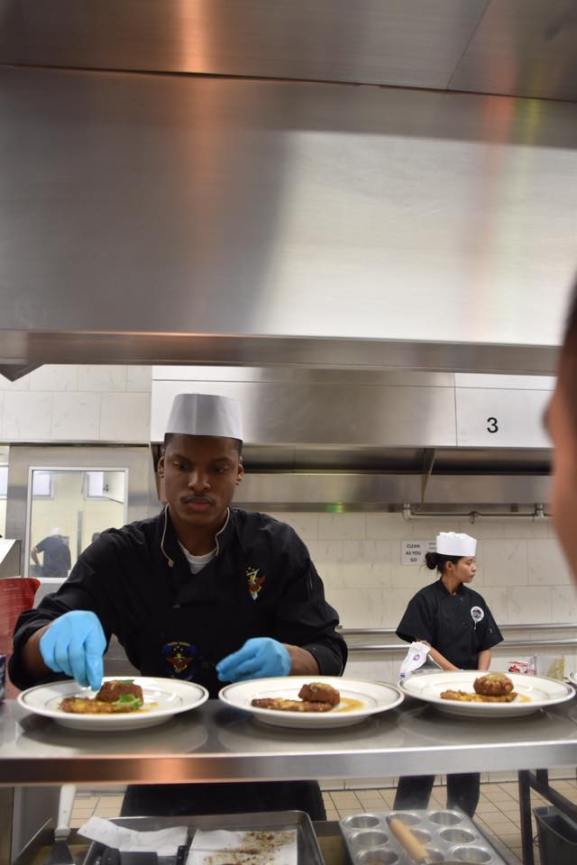 At the table, Molina presented pineapple fritters with a chocolate Crisco sauce, with a sprinkling of sunflower seeds. I know what it sounds like, but he was hitherto unfamiliar with Crisco (shortening). 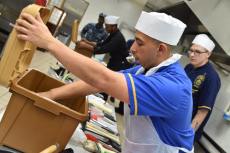 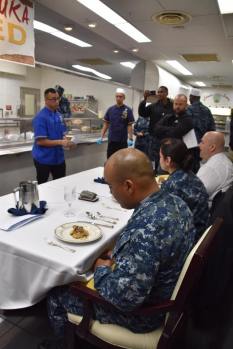 Unfortunately for him, the judges grew familiar with its flavor after each bite.

My “cookie-muffins” were celebrated for their flavor and creativity, the improvement in presentation recognized, though this one judge- I remember him by the name Noble- insisted,

“You already know what I’m gonna say, don’t you?”

He had been saying it since the first round.

“Here, again, we have paradise with nothing but a cliff in the way, and you’ve brought us right to the edge of that cliff and left us there.”

He went on to talk about the ways I could have enhanced the dish and brought some height and intrigue into its presentation. In this round and the ones leading to it, I didn’t agree with everything he said but could at least see his point. But to do something like stick the pineapple wedge in my crumbly muffin so it would stand without, a total redesign of the dish, was physically impossible.

But that’s beside the point. His next words to me were, “Congratulations.” My dish was safe from the chopping block. I won!

My team was overjoyed. I was hungry, only getting to sample the food as I prepared it. I was hungry also  for victory! I was ready to do it all over again. I would go on to compete in the Final, the championship round on Monday with C7F’s Juan and USS Blue Ridge’s Huy “The Phantom” Pham (I just made that name up), and the winner of the following day’s competition. I spent the weekend in anticipation, while Juan stoked the flame with his trash talking. Smile and wave!