Snatched out of Brooklyn, New York before my youth, Georgia and I haven’t had the greatest relationship. But I’ve discovered hope in Atlanta. One of the things I’ve come to do at least once every time I return- with the exception of this trip- is breakfast at West Egg Café. I’m a fan of their mastery of the basics and their willingness to switch it up, keeping it fresh. My brother, Rich, will even go as far as to say that they not only have the best coffee, but also the best water in Atlanta. But this time, we spent our time at the table of Morningside Kitchen, right outside of Midtown. 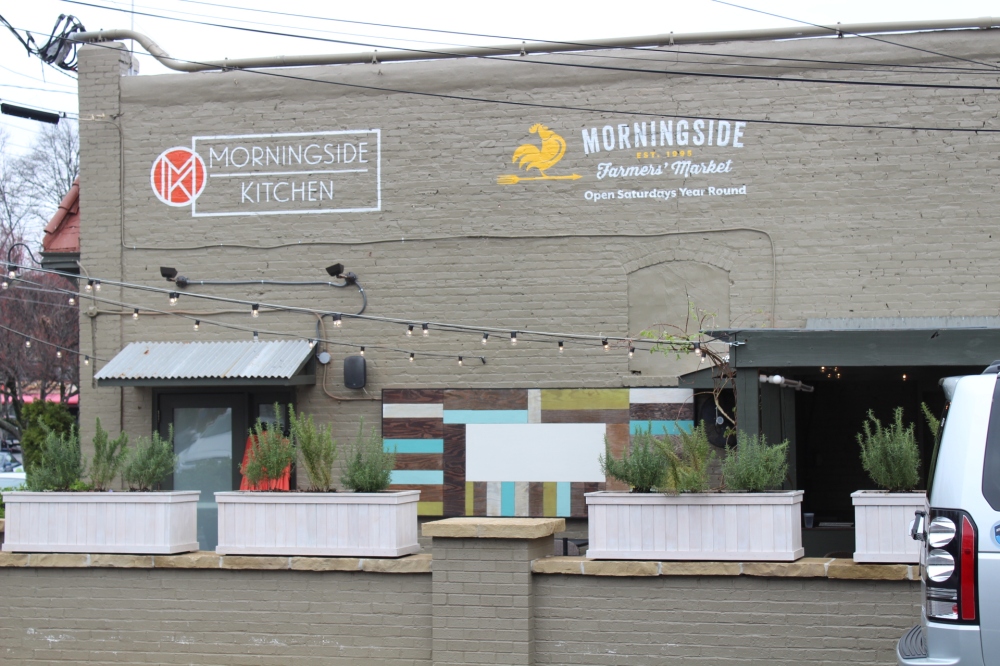 As we pulled up, I straightened up my slouching posture, taking in the unfamiliar surroundings, the strip of storefronts to my left and to my right, with Morningside protruding on the end of the strip. Out of the cold, misty outdoors and into the bustling restaurant. It was a refreshing new atmosphere. I was glad to have visited a restaurant I hadn’t been to, especially because I assumed I was headed somewhere else altogether. The place looked promising, its outside with the feeling of a town with its narrowing streets and nearby neighbors joined by their brick façade. Beneath a shingled awning the door opened to an array of smiles with a friendly and sunny ambience, never minding the drizzle outside.

My mood was brightened all the more with the discovery of family I didn’t know would be joining us. Some of my family gathered to wish me a happy birthday. Actually, I thought it was just a farewell. I found my Rich at the bar, the sound of champagne flowing from his flute. He was drinking a gingermosa. My initial thought was gin and orange juice. I’m not so cocktail savvy yet. He ordered me one too,- ginger beer and champagne- a more mature, mellow flavor. 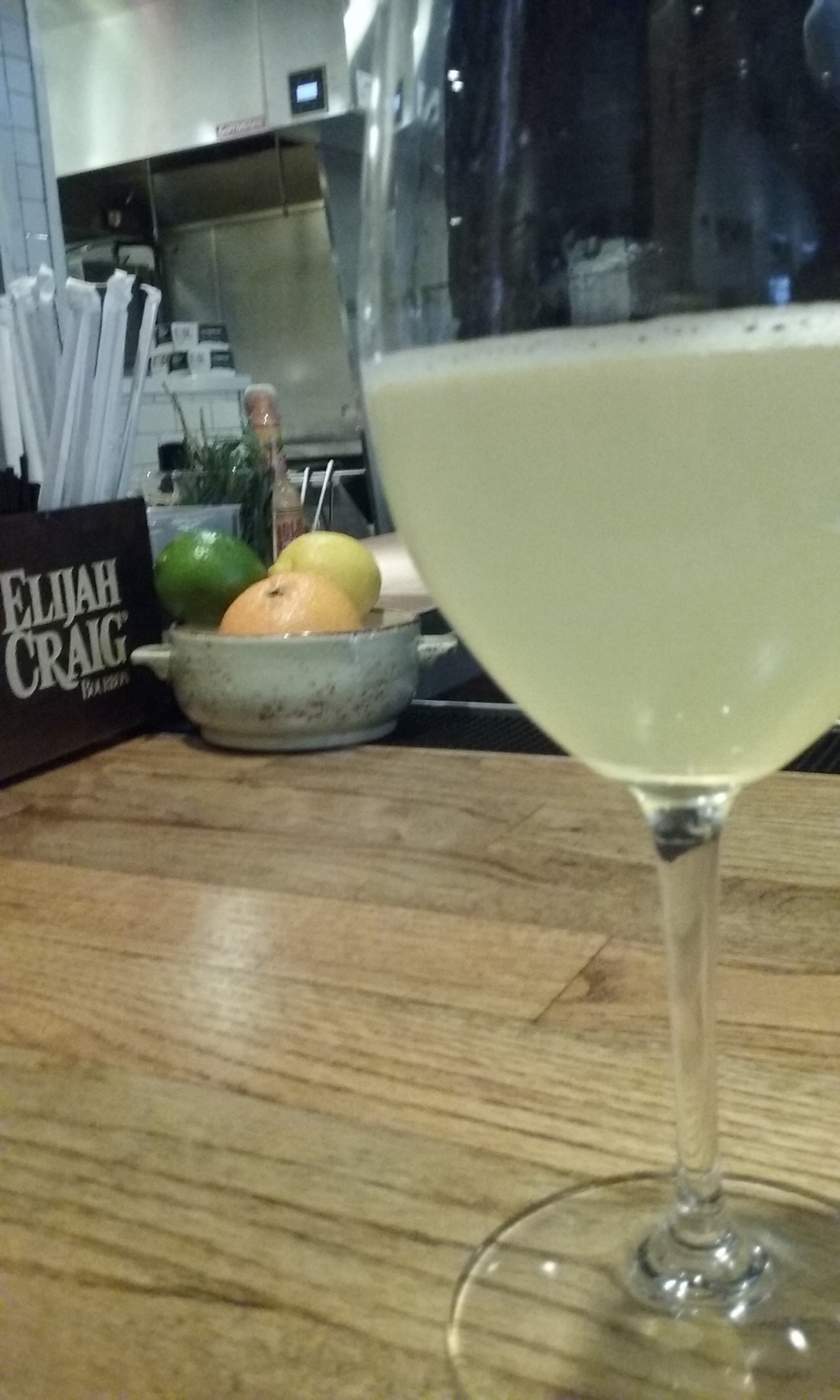 We continued to the table to examine the menu. It looked pretty good: hashes, “benedicts”, cakes, and more. The prices were fairly decent too. I looked at their brunch starters and wanted to get something that could be shared. I heard the smoked salmon rilletes were good but the shakshouka– poached eggs, with peppers, onions, tomatoes, smoked paprika, and grilled toast- was intriguing. They were out of rilletes making my choice that much simpler. Someone else at the table ordered the cool dip trio of hummus, eggplant and roasted green pepper dips served with grilled pita and sliced carrots and radish. 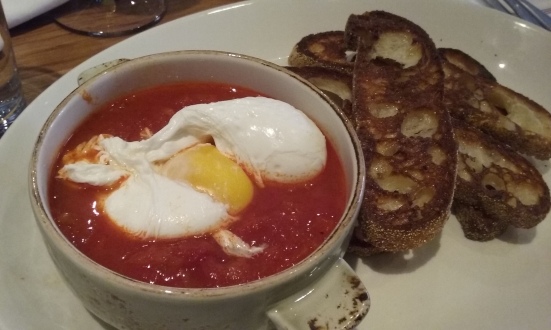 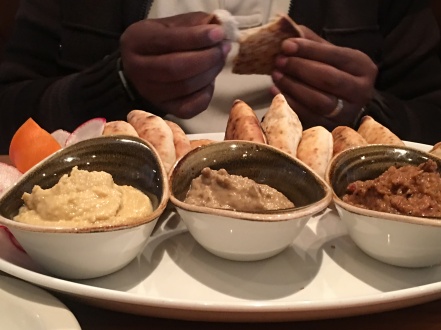 The shakshouka arrived with a couple pieces of crispy toast, or maybe croutons, the tomatoes et al in a ceramic dish with two poached eggs on its surface. The flavors weren’t very complex but the trios offerings were much more satisfying. I enjoyed the
“Rotisserie chicken” sensation of the hummus- rich with herbs and spice. I liked the green pepper too, attracted to its sweet flavor. It’s flavor lasted much longer than the pita, or the bread from my shakshouka, eating the rest with my spoon. The remaining dip was taken to-go.

We’d now await our entrees. I ordered a short rib hash with avocado and poached eggs draped with sauce choron– a tomato variant of hollandaise- subject to the recommendation of our server; if he knew of a tastier dish, I was having that; but he gave me the go ahead. The short ribs were pleasantly tender but that was the most excitement found in the dish. I wished for greater depth of flavor and diversity of texture. I understand it was a hash but even a quick kiss on the face of a flaming cast iron would done fine. And I was suspicious of the avocado mash, wishing for slices. My sister ordered the rotisserie chicken hash-full of flavor but feeling, to her, like mash in the mouth.

Oh and I also ordered a side of their cheddar-gouda grits for the sake of comparison; West Egg’s grits, so far, are the only grits in the world that Rich eats. Morningside didn’t change that. They lacked the supple, creamy, custard like feel that I’ve experienced at West Eg- Just missing something.

Good start to start the day? Or wrong side of the bed? Fair selection of cocktails. Ok food. But better company! Also our server wasn’t bad. He was spread thin but made great effort to remedy that, attending to our needs and accommodate my comedic brothers silly requests with patience. If you go knowing what to expect, you won’t be upset. I could whip these up in my kitchen on any late morning with no problem, however- though me and the poached eggs don’t always get along. But brunch isn’t there mainstay so I’d give them a chance for dinner service but will continue to hail the West Egg as the breakfast spot of Atlanta until you show me otherwise. If you beat me to Morningside Kitchen for dinner, won’t you let us know how it is? Know any where else to find a great breakfast in The greater Atlanta area?