Scrolling down my Facebook wall, I often encounter  pictures of nostalgia, the emotional  expression of Military friends glad to be home, as they stand in the Walmart parking lot- arms up in celebration- or peek in the drive-thru window of In-N-Out  Burger, giddy with anticipation. With every trip, especially to a place that’s called home (even if by some sorta technicality) we have lists of the things we must do and the places we must eat before we take off. But after entering the airport recently, taking in the familiar sights and sounds, while driving down one of 2 lane roads of Georgia’s “Greater Atlanta” area, my gaze flapping in the wind, I didn’t miss much about Georgia. (Sorry.) I did miss my family, though, the reason for every visit. Nonetheless, if I had to make a list, here are some things that have become routine. 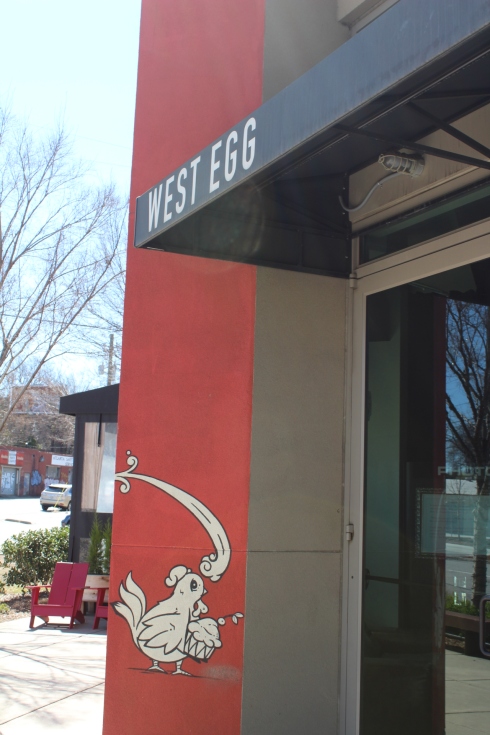 What better way to start your day, or this post. I celebrated West Egg last week for their doing the simple well and not stopping there, taking strides toward creativity. They serve delicious coffee, brewing locally roasted Batdorf and Bronson coffee. My favorite on their menu is the Georgia Benedict-built, from the b0ttom up, of an open face biscuit, turkey sausage patties on each, two eggs-any style- and covered in sausage gravy. Mmm! Served with a side of creamy roasted garlic grits or skillet potatoes. On occasion, I’ll order a  Belgian waffle for dessert, with a ball of spiced honey butter, poised above the crisp, square impressions of the waffle iron with the tang of buttermilk, bound inside. Best breakfast in Atlanta? Until I take a seat at a table that tells me otherwise.

A breeze rushes out at you, set free as the automatic door slides out of its way, driving patrons to clench the fibers of jackets and sweaters closer to their skin. The approach continues, down the concrete hallway, vibrant photos lining the walls. Hanging from the ceiling is a sign prohibiting the use of cameras?  The walk is like that of a boxer, cutting through the anticipation that awaits at the other end of the tunnel of the action that will take place in the ring. The DeKalb Farmer’s Market has damaged my perception of the farmers market- as few markets reach the bar. It was for me the first definition of what a farmer’s market is. It’s warehouse of all things food is unmatched by any other food market. I’ve seen. They have available one of the most diverse selection of produce, meats, fish and birds from all over. Not so farm-to-table but a great offering of exposure. I make it my mission to never leave without something I’ve never tasted. Many packaged goods are produced in house, including spices, juices, and awesome baked goods- brioche, challah, Jamaican hard dough, cake, and muffins. They even have a prepared hot foods section.

Have you ever been “WELCOMEd TO MOES!? Where by the time you get to the register, if you’ve stuffed your Southwestern burrito with as much as mine- its cold? Not all their fault. Well, their lesser known West Coast burrito rolling completion- Gezzo’s, formerly known as Gecko’s, is a different animal.  They have pineapple among their toppings! I’m almost sure it comes out of a can but still… Their jerk and teriyaki chickens get my taste buds watering. But really and truly, they’ve won my loyalty  thanks to the all-you-can-eat tacos on Thursday. (If they did it on Taco Tuesday, it would make too much sense and we’d probably eat them out of business.) All you can eat- for $12, unless you get the much worth it fish and shrimp added in for 3 bucks more. I  love the seafood tacos especially on the hard-shell, fried in store. Little tip: if you wanna get the biggest bang for your buck, leave the rice out of it.

The namesake of its late founder, perhaps Georgia’s biggest philanthropist Truett Cathy, Truetts grille is, in short, a 50’s diner themed Chic-fil-A, serving diner favorites in addition to the standard Chic-fil-A menu. But I don’t think you really need me to tell you what to do when you get here. The motto of their most successful ad campaign is EAT MOR CHIKIN. The chicken sandwich is a crispy, pressure fried breast of chicken- breaded just before frying- with two pickles on a bun, slipped into a foil lined sleeve. I put sauce on it, not because the chicken begs for it, but because the sauces are so good, as simple as they may be. My favorites are the Chic-fil-A sauce and the honey roasted bbq sauce. They’re reminiscent of some sort of smoky mix of bbq sauce, honey mustard and mayo. And when I first visited, I was fascinated by their waffle fries- the first time I had ever seen’em.

I know it sounds like I’m making a case for Georgia, but what do you want from me? Gotta make the best of it. I vow to stay in Midtown nextime I’m there, a more urban district. Till then, back to Japan!