“A friend of Zahhk’s is a friend off mine,” he said with that thick, right-out-of-Italy accent, offering a handshake. Alessandro stands behind the counter about 6ft tall- behind the counter. On the other side of the counter, he’s maybe 5’6.  I dunno. With spiked hair and his arms colored with ink, his T-shirt, shorts, and sneakers, the pen wedged behind his ear, he might not be the guy you expected to be making your pizza. But I don’t yet know anyone else in #MyKinjo better suited for the job. What does a cook look like anyway?

I wasn’t looking for a friend though. I was looking for good food, and Zahhk- Zach B.- my culinary brother in arms, said that this was the place to find it. I went to go see about this Napoli guy, What was the big deal? As I walked into Napoli, the small place that seats maybe 10, I made it clear,

“I want you to know I’m only here by recommendation of your friend.”

He chuckled and tells me that a friend of Zack’s is a friend of his. I peered over the simple menu with maybe 10 pizza offerings. My mind a little preoccupied, I asked him for his suggestion- gave him control. 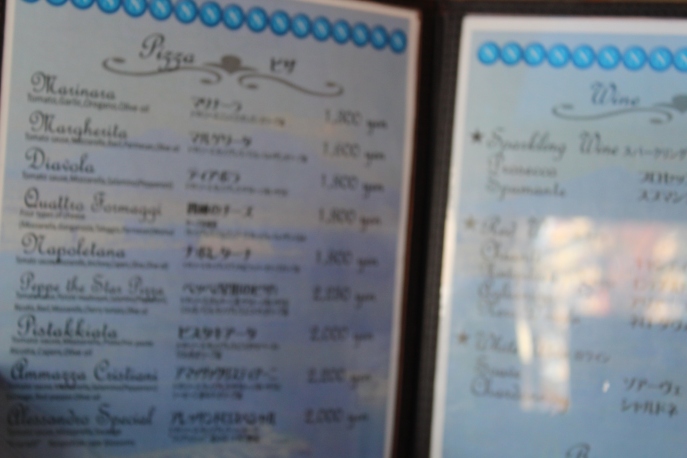 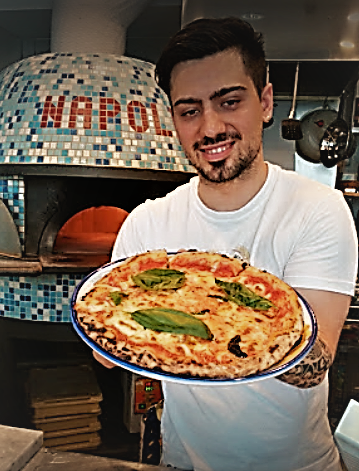 Photo (above) sourced from Minoru Saito.

He prepared the Ammazza, throwing a cloud of flour over his work counter, stretching the dough, swirling on the marinara, and topping it with healthy chunks of mozzarella (You gotta say that with your Italian accent though; let me hear it!) plus  salamino, and red pepper before  sliding it onto the pizza peal and firing it up in his blazing stone oven, rotating the bubbling pie every few seconds. It came out of the oven still bubbling and steaming- onto his cutting station. With the pizza cutter, the one pie became 8 slices.

Letting it cool just a little keeps the toppings from falling off, unless you wanna eat with a fork and knife. This is thin crust were talking about. You don’t want it to get cold. So the verdict?

My head slowly fell into a nod of approval. The pizza was hot, rich with the little bit of marinara (some say its too sweet0 not sure I agree) that was on it, gooey with cheese. Before you can even bite it though, you’re confronted with the pleasant char from the hot stone of the oven, making for a crisp exterior crust. The pizza dripped with oil. I don’t think its right to say it dripped with grease. This is the kind of oil that you want on your pizza, the kind you intentionally put on there, the kind that “hip” cooks and foodies call EVOO- extra virgin olive oil- straight from Italy I’m pretty sure. 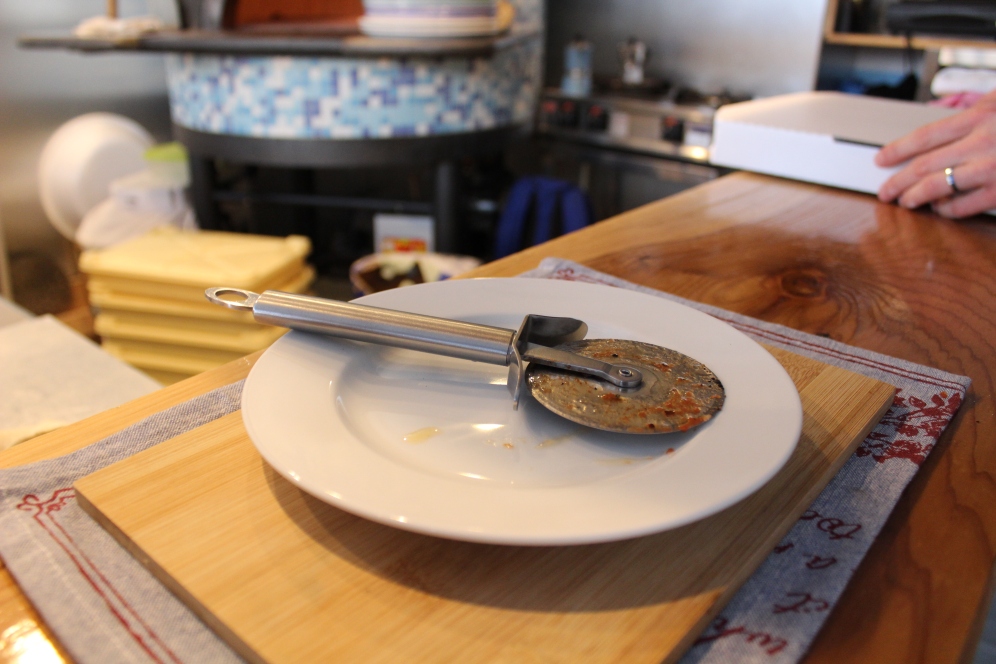 My first time, I felt the crust was a little salty, but it has since mellowed out. The guy’s as real as it gets for Yokosuka. Sat down the other day with a friend commenting that friends who have been stationed with the military in Italy say they haven’t found anything closer to what they’ve known in Italy. They guys got two certs on the wall that attest to his authentic Napolitano style. No seriously, it says “Attestato”.  We’re in Japan! What are the chances of finding authentic Italian pizza anywhere else? Japan’s got its thing (I have yet to try) but it’s not quite Italian.

So what’s Napoli doing in Japan? Story goes: the shops owner was opening the spot and was looking for the person who could live up to the name. He knew a friend that runs a few Italian restaurants in Tokyo and asked if he knew anybody. That friend made  a trip to Italy for the Pizza Village festival in Napoli– where the best pizzaiolo is sought out- and had come to know Alessandro who was promoting a product. They hit it off and Alessandro found himself on a plane to Japan less than two years ago.

He’s been doing the pizza gig for 15 years now, since he was 11. He started out as an apprentice in the restaurants in Napoli, scrubbing toilets, washing dishes, and occasionally slinging dough. He started on the path to become a pizzaiolo because when going out to the shops, he’d see the cook “freestyling” and thought it was cool. But these masters, he says, are not generous with their trade secrets and when he learned all he could at one shop, he’d trade it in for the next.

And here he is now, regarded by the Yokosuka locals as the pizza master He wants to keep it traditional- Italian. There are disciplines and techniques he might still learn from somebody, but he wishes for his pizza to maintain its integrity. “Find your style and keep going from there. You can’t make everybody happy.” He’s sticking to fresh ingredients. To Alessandro, the most important thing for a good pizza though is its dough. “You can put all sorts of great ingredients on a pizza but it’s garbage if the dough is garbage.” Every detail counts.

After some thought, he suggests that even more important than the dough is the passion. “You’ve got to be passionate about what you do or it won’t be good. I’m happy wake up every morning to come do what I do.”  Further exploring his motivations, he grimaces and says, “When a customer gets a pizza, I want it to give him an orgasm.” (Sorry parents).

“But what’s the big dream?” I ask, trying to maintain my composure.

“More an aspiration than a dream, I want to one day own my own shop.”

He’s on his way. And you should be on yours to. Go check it out and let him know why you did.  Already been? What’s your favorite pie? What do you think about the creamy, mascarpone laden, gently sweetened tiramisu? (I think it could be stronger but he say’s he’s got to watch out for the kids.) But lets talk about it in the comments below! Ciao!