Okay, maybe that’s not fair but it was my experience (and the words just work). Launa, right outside the base, between Main and Womble Gates, is buzzing with attention, especially from Japanese nationals. I took this as an indication of good food and a great time. Why else would the Japanese, who I imagine better know the city and its choices, populate the establishment. I think maybe they just don’t know better. The burger is regarded as an American classic.

There is more to say about the burger scene in Yokosuka, what has become known as the Yokosuka Navy Burger and the often accompanying cherry cheesecake. But we’ll dig into that a bit deeper in a later post.

I walked into Launa to investigate what it was bringing in the crowds. It was lunch time. Nothing but smiling faces- none that looked like mine. Each of the maybe 4 or 5 tables on the first floor were filled, and crowded with plates hidden under massive burgers and stacks of fries. I made my way to the counter, briefly looked and that menu and decided to keep it simple. “Yokosuka Navy Burger onegaishimasu!”

As I waited for my burger, I watched the joyfully round, hibiscus robed cook manning the pans on the stove. Some with fries, with burgers. Plates spread on his work station. The buns were massive! I watched with a smile as the burgers flew past me from the kitchen. 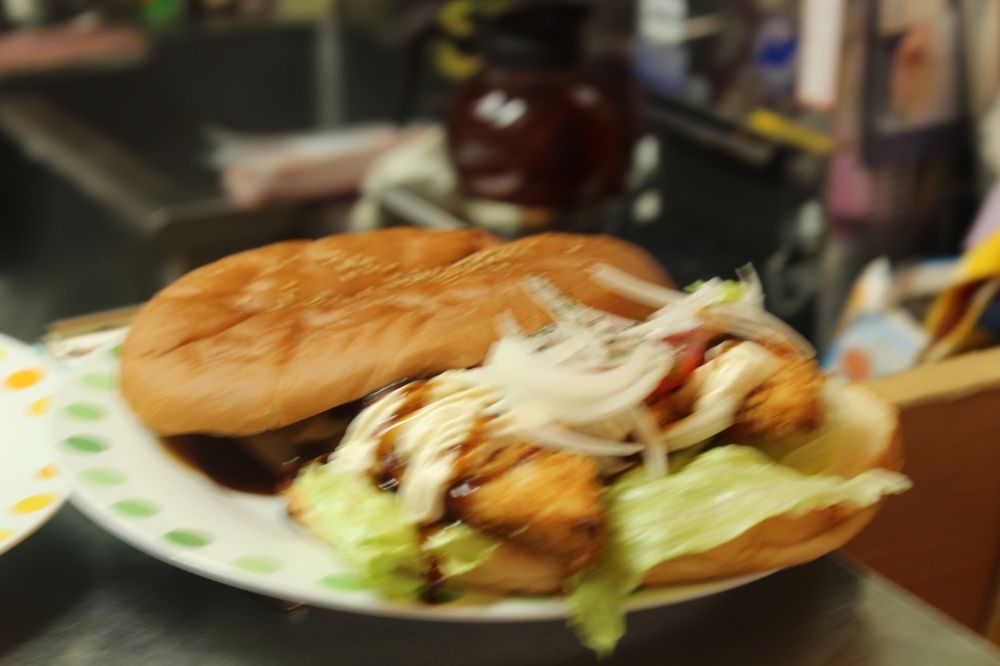 But now it was my turn. (To be fair, I took mine to go- a 20 minute walk.) I unwrapped the burger, still marveling at its size. I lift the lid to size up my competition to find– a single oblong patty, about the size and shape of those oblong chicken sandwiches Burger Kings serves or used to serve; it’s been a while. The patty took up a little less than a third of the bun. There were a single strip of what the Japanese expression of bacon strapping the burger to the bun. (I’ll explain later.) Then there was plenty of lettuce, tomato, onions, ketchup and mayo. I wasn’t very excited. 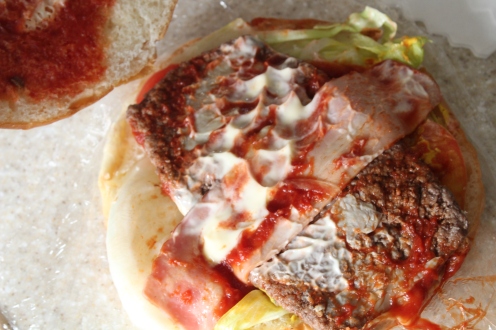 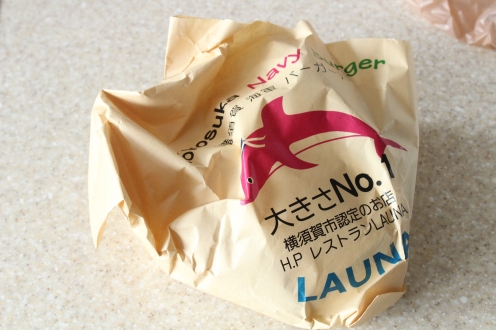 I cut the burger into 4, yielding 4 standard sandwiches. Pretty soon, I was left with nothing but ketchup soaked bread. The patty contributed little more than a textural change. For the roughly 1500 yen paid, I think we could’ve done better. Perhaps their other menu items are better. But we’re here for the burger!

Leave a Reply to Tip of the Tongue Cancel reply