It hurts to write this post, only because I’ve written it before, lost in the hustle.

During my absence from the Tip of the Tongue I had the privilege of hosting my mother and brother in my life in Japan. With my mother, we took a Tokyo trip to one of the busiest intersection in the world- Shibuya.

There we took fascination to the predictable behavior of the crowds that flooded the street during the red light, stubbornly lingering after the light turned, remaining the prey of impatient drivers knowing. their rights. We also saw the Hachiko statue. On the way home, I had to school my mother in Japanese transit etiquette.

The next day, we met my brother in Yokohama and wandered to World Porters, climbing to the rooftop “garden” with a wonderful view of Minato Mirai. We then continued to Red Brick Warehouse, where it just happened to be Oktoberfest.

I don’t generally comment on prices in Japan, but maybe now’s a good time to recognize that food and drinks are commonly pretty costly, making it almost futile to compare one place to another, depending on what your shopping around for. But will talk about the fest, and our other activities, another time, maybe.

Some closure on the search for the best burger in Yokosuka: I was expecting a Japanese friend, Masaya, and wanted to offer him a good burger, a fair representation of the American fare. America (in the voice of the late Bernie Mac), I promise I didn’t let you down. He’s still talking about the burger.

On the eve of a new week, I headed out into the night for what was to be a quick run to store for the components of a simply good burger: ground beef, onions, lettuce, tomato, cheese, pickles and the container for it all- the buns! Oh and I can’t forget the bacon! I already had ketchup, mustard, and mayo.

But I couldn’t find pickles and would have to settle for the relish in my fridge.

What was more amusing was that in all the breads to be found near the bakery, none of them were burger buns! I saw dinner rolls, English muffins, French bread, standard and thick sliced bread, and all sorts of filled bread- stuffings ranging from butter and fruit, to cream and the infamous anko (red bean paste). But I couldn’t find any bread wide or soft enough to house a good American burger. Tired of making laps around the shelf, I settled on the idea that I would just make my own! 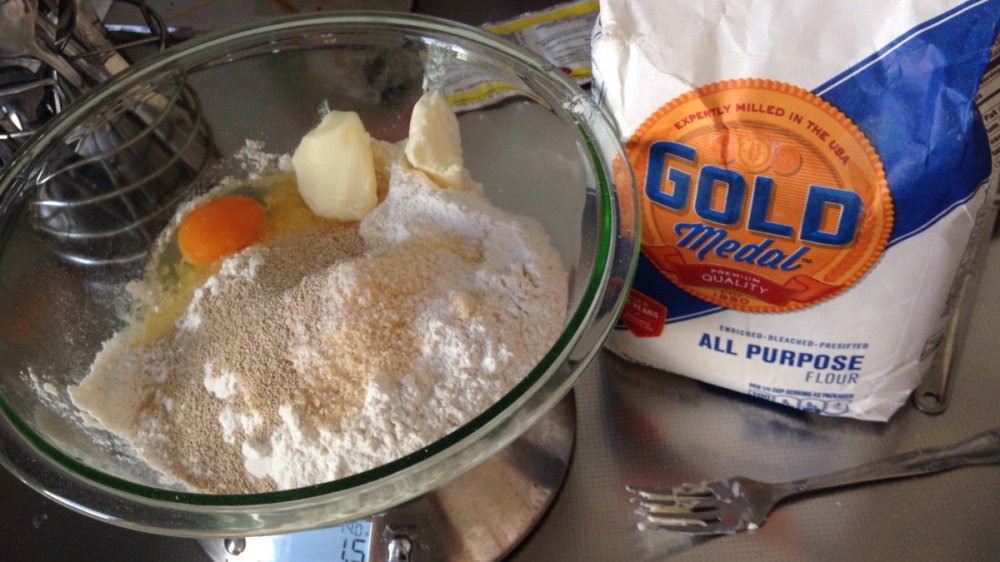 The next morning, I whipped together the dough ingredints for the buns, mixing and kneading till smooth, wrapped it and left it on the counter to rise so it would be ready to bake when we returned from church.

When we got back, I punched the gassy balloon of bread dough, and portioned it into about 9 buns and set aside to rise again while we prepped the rest of the ingredients.

Bacon was fried on low heat, flipped often. My friend Masaya cut the potatoes for fries and also the lettuce, tomato, and onions for the burgers. I formed the ground beef into patties (with half a minced onion and a splash of soy sauce- not standard Yokosuka Navy guidelines but an homage to Pops and respect to my guest), crusted with some salt and pepper. I sautéed some mushrooms. And I gave the potatoes their first low fry till soft.

Masaya was back at the table egg-washing the buns and sprinkling them with sesame seeds. With the buns in the oven, the half pound rounds of glorious beef were up to a sizzle on top the range, fries on to their second high fry to a crisp exterior (and fluffy inside). Things were moving fast now! Two slices of cheese began to conform to the contour of the burger, mushrooms and bacon found their place in the melting cheese.

Plates were prepped. Fries sprinkled (with salt, pepper, and smoked paprika). Buns, glimmering now, sliced and toasted. And finally the burgers were built. 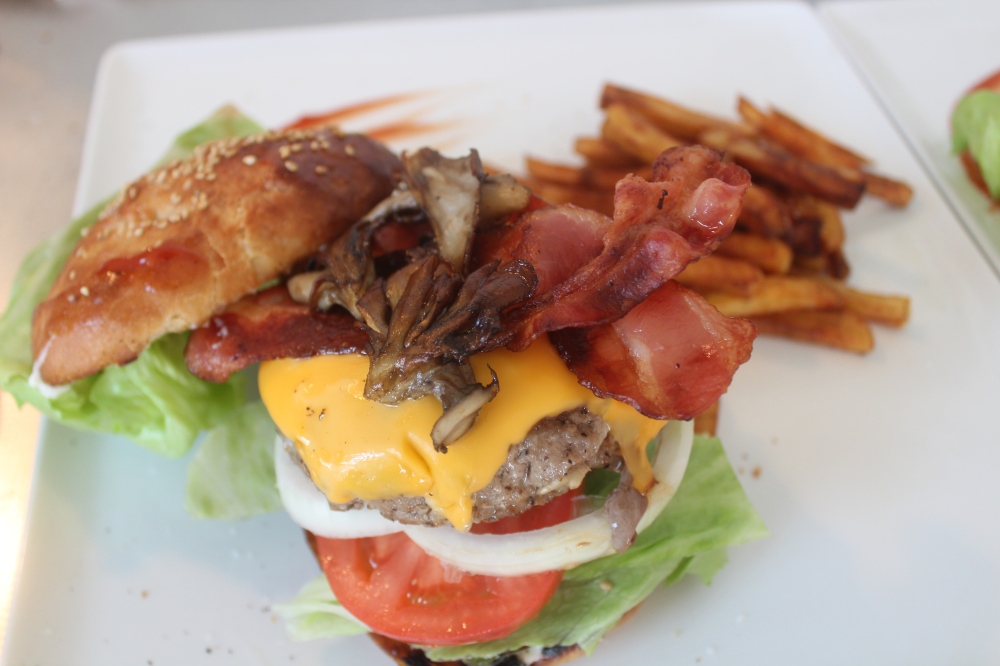 As we sat down to the table I thought maybe we were biting of more than we could chew. Prayer prayed, “Amen” declared, we bit in- and a fountain rushed out. Napkins on standby revealed nothing but smiles. My goodness!  These burgers were good!

Toasty sesame seed buns still exhaling the steam of life; the meat salivating in the cheese’s embrace; the bacon with nearly the crisp of a salty potato chip but still meaty, in sweet mingling with the condiments; lettuce, tomato, and onion keeping it garden fresh but not washing away the flavor of the burgers. I am not biased to my cooking. If I say it’s good, I mean it and you can believe it. If it wasn’t, I’d say so.

If you don’t believe me, ask Masaya-san. He’s an honest man! He said he’d been to plenty of restaurants throughout the city, even Tsunami- and they’ve got great burgers. More often than not, he can only afford to watch his kids eat the equivalent of a kids meal. But even so, these burgers we prepared on this magnificent Sunday were the best he’s tasted. After clearing the table and moving around a bit, we’d availed room for dessert. Ice cream floats. An ice berg of vanilla cream foamed as it floated in the sea of Coke. A coffee dusted Oreo sat on top, just for fun.

As convinced as I am that these burgers were truly delicious- honto ni oishi– the fact that our own hands made them supports that belief. I encourage you to get in the kitchen and try your hand at the simplicities. Sure it may sometimes be easier to just slit a packet open or maybe punch those numbers on your microwave, but beyond taste, none of those can yield the dynamic of flavor that the cherished time you spend preparing a meal with friends and family delivers… especially in all of this rain.