I’ve been in Japan for quite a while now. One thing I don’t believe I’ve yet experienced to the fullest is sushi; but that will soon change with my upcoming Tokyo food tour. In the meantime, the Liberty Center on the Navy base offered a demo called Sushi 101. Sailors were given the opportunity to practice sushi making. I stepped up, pulled on a pair of gloves, and got to work.

By the instruction of Alona, whom we were to regard as the pro, I oiled my and hands and grabbed wads of rice that were rolled into nigiri– these little nearly cylindrical nuggets, onto which we laid sliced salmon or tuna or strapped on some eel with a band of nori (seaweed). After about six of these, I got bored. “What next?” I asked. I asked what more I could do, glancing at the “crab” salad and untouched nori on the table. With these we formed the same nigiri pieces but rather than wrapping a strap around the rice I the manner of a saddle or a belt, the larger nori strip stood vertically around the rice as a shell for the crab meet that filled its center and was dashed with siracha. 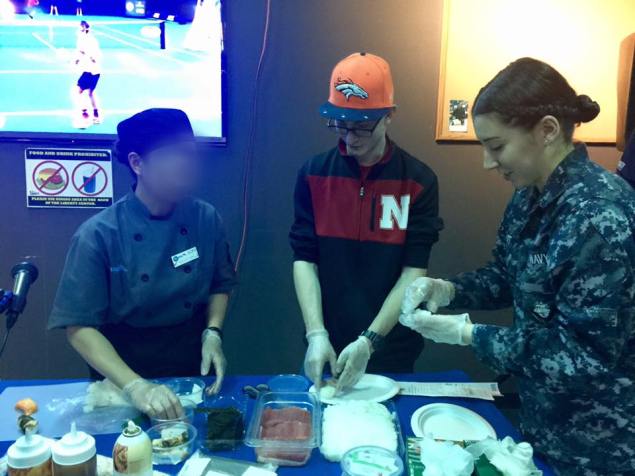 “Is he a professional? I feel like he’s undercover or something.” The sailor to my right, who coincidentally was be from Baltimore, hesitantly continued her sushi production as she pointed and scrutinized mine. I kept my head down and was quiet except for the rising corners of my mouth. As I smiled, I thought back to my days behind the sushi counter at Wegmans in Hunt Valley, Maryland. Apparently my two weeks of rice cookers, bamboo mats, and soy sauce and wasabi packs afforded me at least the appearance of experience.

I now had a plate full of sushi in front of me. I was done. While the others prepared to eat their work, I looked for someone willing to accept mine. (It wasn’t too hard.) I was saving room for the sushi I’d be eating later in the contest.

The contest only included the race aspect that most eating contests are comprised of. Competitors were each given the same amount of sushi, but I doubt the same amount of wasabi. The contest organizers thought it would be fun to smear wasabi and siracha across the nigiri, inconspicuously concealed beneath the fish. It didn’t phase me but ruined the chance to enjoy it- probably for the better. Water bottles were opened, and fingers were wiggling. Ready! Set! GO!!! I was launching the fish lined pillows of rice into the hole in my face. biting down once or twice, hoping to make swallowing more manageable. My idea was to eat the ones with most wasabi first, mellowing it out along the way with pieces that weren’t as heavily infected. After about the first four of maybe nine pieces, I reached for a sip of water to help it all down. I was back in the game- I thought. Moments afterward, “We have a winner!” How? I had looked around earlier, my plate being emptied faster than any other. Turns out the winner, Adonis Limes, had adjusted his strategy along the way, just throwing it back and swallowing, rendering my one to two bites ineffective.

I blame my oldest sister, Ebony. I’ve always loved food. When I was younger, I used to try and consume it as quickly as I could.- forking up as much as would fit in my mouth at a time; this probably had something to do with the fact that I had three older brothers and three older sisters sharing from the same pot. But my sister, Princess Etiquette, thought this was a problem and put forth the effort to tear me away from the developing habit, firing off words like, “Slow down! It’s not going anywhere, you know.” Eventually, I slowed down. As I matured, I developed a greater appreciation for food and the joy of flavor. So even in trying to race, I imagine my sister subconsciously holding the reigns of the race horse, yelling “Taste!” (On a tangent, I’m reminded of the race scene at the track in the Incredibles when the family coaches Dash to cross the finish line in second place and rejoice in his self control- in other words- not winning.

But there will be others, and there is definitely the rest of the country to taste! Stick with me, and I’ll share with you the flavors of the Japanese dining experience.